Kathy Griffin Tells Jim Acosta How to Kill President Trump, Twitter Does Nothing

Kathy Griffin is an absolute nobody. I bet most people wouldn't even know who she was if it weren't for her popping up in the news for being a vile woman.

She's always making threats against the President and she just did so once again.

How many times does this need to happen before the FBI or Secret Service get involved and take some action against her because threatening the President of the United States is a serious thing.

Griffin gave CNN reporter Jim Acosta a tip on how to kill him:

CNN’s Jim Acosta tweeted: Trump at diabetes event at WH: “I don’t use insulin. Should I be?”

“Syringe with nothing but air inside it would do the trick,” Griffin said in a tweet responding to Jim Acosta.

The Washington Examiner wrote in a tweet that linked to a news article: “[Kathy Griffin] advocates for someone to stab [President Trump] with syringe full of air. Air embolisms, caused by air getting into the bloodstream, can be fatal.”

Griffin responded: “I SURE DID, F**KER.”

A Washington Examiner reporter later wrote that Twitter told them that they would “look into” whether Griffin’s tweets violated their terms of service.

Griffin responded: “Go f**k yourself. Do you wanna tussle with me, you f**king amateur?” 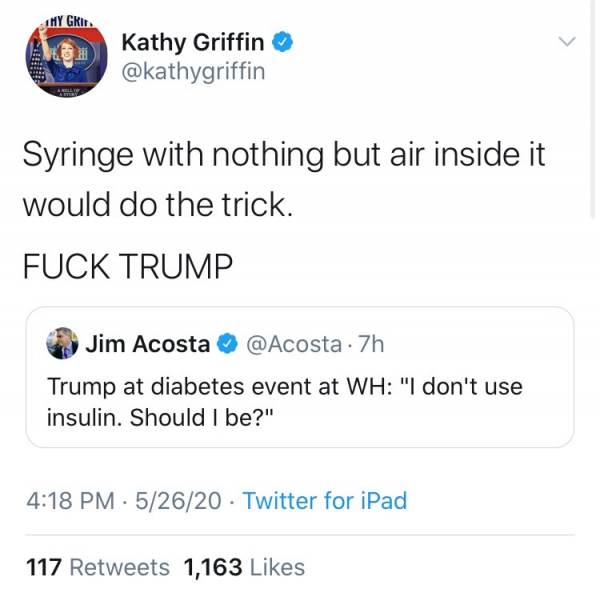 I took a screenshot of this just to be safe. 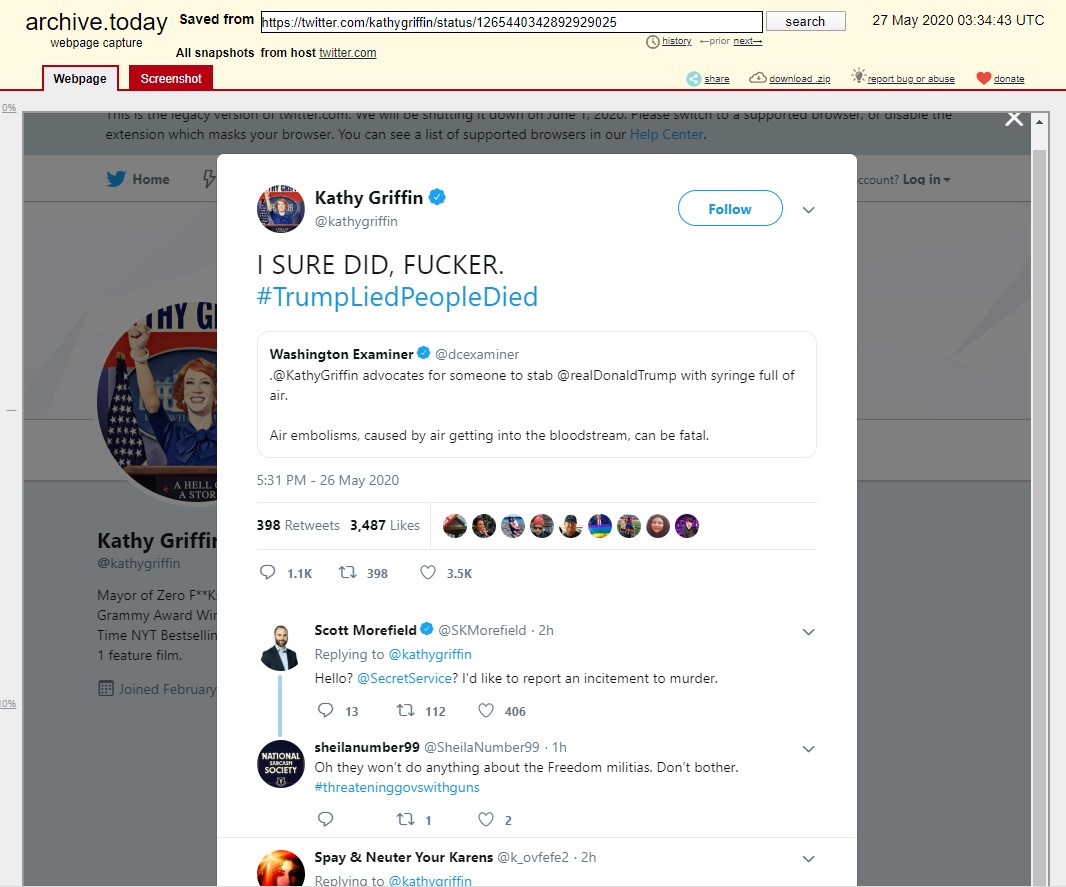 Donald Jr. tweeted back a response to Griffin, “I don’t think past their prime comedians who tweet stupid things should be banned on here, but next time @twitter @jack bans a conservative for saying something not PC, just remember they have no problem with Dems making death threats against @realDonaldTrump on their platform.”

There were many people who did alert the Secret Service this time so maybe they will do something. I know they'll at least be watching her closely.

SHOCKING Video of Minneapolis After Looting and MASSIVE Destruction During Riots

It is absolutely astonishing to see the disastrous riots going on in Minneapolis right now.

It's not astonishing simply for the fact that they're doing it, I get it, but the magnitude of destruction that these people are doing to the city is unbelievable.

Devastating Betrayal From One Of The Democrats Own Shakes The House

The Muslim news outlet known as Al-Arabiya reported something that is very massive and could potentially ruin anti-Semitic House Democrat Ilhan Omar.

She already has so much stacked up against her already that it's almost impossible that she'll win her election in November and this isn't going to help her one bit.

As President Donald Trump cracks down on social media censorship, Twitter hid one of his tweets addressing the Minneapolis riots. The platform claims that his post violated the community standards by "glorifying violence." Give me a break!

CNN's Baldwin Begs Forgiveness for White Privilege: 'I am so Angry'

On Thursday, CNN’s “Newsroom,” host Brooke Baldwin had a meltdown while interviewing Minneapolis City Council member Andrea Jenkins regarding the death of George Floyd by police.

Regardless of the circumstances, Floyd's death was unnecessary and unjust. He should be alive today.

Terrence Williams Responds to Minneapolis Looting: 'This is Not How You Get Justice'

Emotions in Minneapolis are certainly running high. Many have taken advantage of the situation and used it as an opportunity to steal.

Terrence Williams took to Twitter to highlight that while the death of George Floyd was tragic and he deserves justice, "stealing TVs and looting stores is not justice."

Armed Patriots Defend Stores During Minneapolis Looting: 'Before Cops There Were Just Americans’

After the death of George Floyd in Minneapolis, the city has responded with riots and looting. The city has turned into pure chaos.

Anyone who has seen the video of George Wallace being killed with a knee to the neck can obviously see it was something that could be avoided. In response, many of the people of Minneapolis have turned to rioting and looting.