For those of you wondering, former President Trump still has some fight left in him. This time he directed it against Tesla ECO Elon Musk.

While campaigning in Alaska for a U.S. Senate candidate on Saturday Trump said, “[Musk] said the other day, ‘Oh, I’ve never voted for a Republican.’”

Elon took to Twitter to respond to someone posting the story, "Not true."

Musk replied to another tweet, giving his thoughts on Trump's future in politics. “I don’t hate the man, but it’s time for Trump to hang up his hat & sail into the sunset.”

“Dems should also call off the attack – don’t make it so that Trump’s only way to survive is to regain the Presidency,” Musk continued.

“Do we really want a bull in a china shop situation every single day!?” Musk said. “Also, I think the legal maximum age for start of  Presidential term should be 69.”'

Musk has also voice his support for Florida Governor Ron DeSantis in 2024.

“I supported Yang last time, but DeSantis has a better chance of winning,” Musk later added.

Trump brought the fire in his response.

“When Elon Musk came to the White House asking me for help on all of his many subsidized projects, whether it’s electric cars that don’t drive long enough, driverless cars that crash, or rocketships to nowhere, without which subsidies he’d be worthless,” Trump wrote on Truth Social, “and telling me how he was a big Trump fan and Republican, I could have said, ‘drop to your knees and beg,’ and he would have done it.”

“Now Elon should focus on getting himself out of the Twitter mess because he could owe $44 billion for something that’s perhaps worthless. Also, lots of competition for electric cars!” 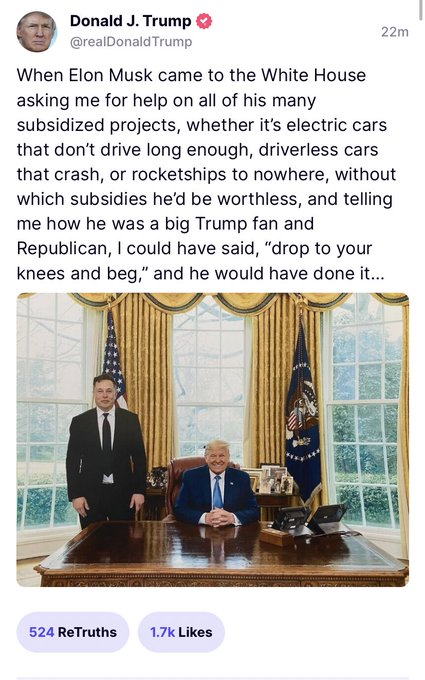