The mainstream media is so unbelievably bad that practically the only person reporting anything about the Hunter Biden scandal is Tucker Carlson. That's probably because he's probably the only one not compromised.

Earlier this week, Tucker made an announcement that some very sensitive documents relating to the Hunter Biden scandal had gone missing.

Tucker said that he had asked one of his producers to sent the documents to him while he was in Los Angeles and now no one knows where they are.

There is a degree of tracking of the package but past that time frame, they have no clue where they have gone.

“Now, to its credit, the company took this very seriously and immediately began a search. They traced the envelope from the moment our producers dropped it off in Manhattan on Monday all the way to 3:44 a.m. yesterday morning — that’s when an employee at sorting facility in another state noticed that our package was open and empty. Apparently, it had been opened,” Carlson continued.

“They went far and beyond, but they found nothing. Those documents have vanished. As of tonight, the company has no idea — and no working theory even — about what happened to this trove of materials, documents that are directly relevant to the presidential campaign just six days from now,” Carlson said. “We spoke to executives at that company a few hours ago. They seemed baffled and deeply bothered by this. And so are we.”

Fortunately, Tucker Carlson is no dummy, nor are the people that he's been working alongside with in regard to these documents.

It's been confirmed thanks to Roger Sollenberger who is a staff writer for Salon, Carlson did make copies of the documents and we can confirm this based on text messages between Roger and Tucker.

Roger: Hi, Tucker, it's Roger. Did you make copies of those documents?

Roger: Or did anyone take photos?

Tucker: Of course. The point is, someone's reading our texts. 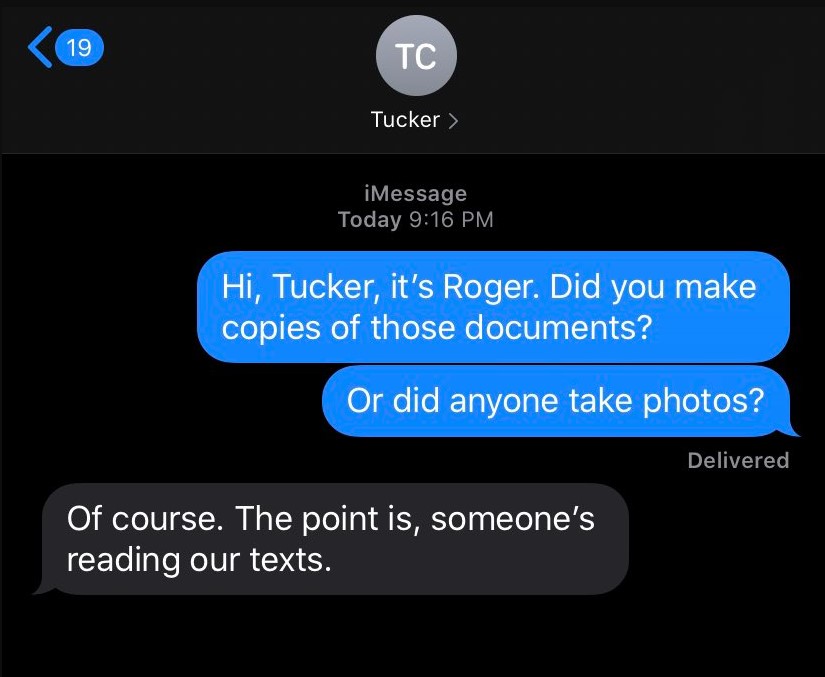 Someone on the Biden team is working extremely hard to stop these documents from being seen. It's amazing how they were even able to intercept these documents, but that just goes to show how corrupt our government is.

UPDATE: It's being reported that the documents were found.

“After an extensive search, we have found the contents of the package and are arranging for its return,” the UPS spokesman told the news outlet. “UPS will always focus first on our customers, and will never stop working to solve issues and make things right.”

Yikes. When can children just be children without sexuality being shoved down their throats?? I do not want my children being taught things that are of unnatural and sexual nature when they should be learning their colors and shapes.

A nursery rhyme cartoon called "Little Baby Bum" has gotten quite popular as young children enjoy the bright colors and singing. However, they have started giving some of the songs a queer makeover, and I believe a line has been crossed.

Gov. Cuomo: President Trump 'Responsible for Every Death in this Country”

New York Governor Andrew Cuomo is now claiming that the nursing home deaths scandal is nothing but a "conspiracy" and blamed President Donald Trump for every COVID-19 death in America.

"The View" Cohost Sunny Hostin said to Cuomo, “There has been a lot of confusion about an alleged March 25 order that directed nursing homes to accept, in New York, infected COVID patients, possibly leading to the death of more than 6,000 seniors.

Debunked by who? And when? Hello! That is fake news! She is either too dumb to realize she is wrong or she is flat lying because she thinks viewers are too dumb to know that she's lying.

Five years ago, if you'd have told me that me that rapper Kanye West would not only become a Christian with a banger worship album, but also start speaking out against abortion and Democrats, I probably wouldn't have believed you. God is amazing!

West is once again condemning Planned Parenthood and calling them out for what they are: eugenicists.

They've been called out on it multiple times and all have testified before Congress multiple times, yet it continues to this day. Even James O'Keefe at Project Veritas has video of Facebook and Google employees talking about how they censor conservatives and Trump supporters especially.

At a speaking engagement in Michigan, former Second Lady Jill Biden was giving a speech since Joe can't get out there and do it.

We know that the left has an awful history of accusing anyone who's not them of being racist.