Rashida Tlaib Asking for Lightning to Strike Her, "F— A National Day of Prayer"

Rep. Rashida Tlaib has been in the House of Representatives for just over a year now, but that's one year way too long.

Rep. Tlaib is one of the most deplorable people in Congress and I'll give you just one recent example of what type of person she is.

Recently, we held Sunday as a National Day of Prayer. During this time our nation came together (not physically) to petition God to heal our nation following 2 Chronicles 7:14 which says, "if my people who are called by my name humble themselves, and pray and seek my face and turn from their wicked ways, then I will hear from heaven and will forgive their sin and heal their land," and to help us in this trying time.

Rashida Tlaib decided though that this was stupid and instead of participating, she retweeted a post from sideshow act David Hogg who said, "F**k a National day of prayer".

It looks like she ended up deleting the tweet, but the internet is unforgiving and the damage has already been done. 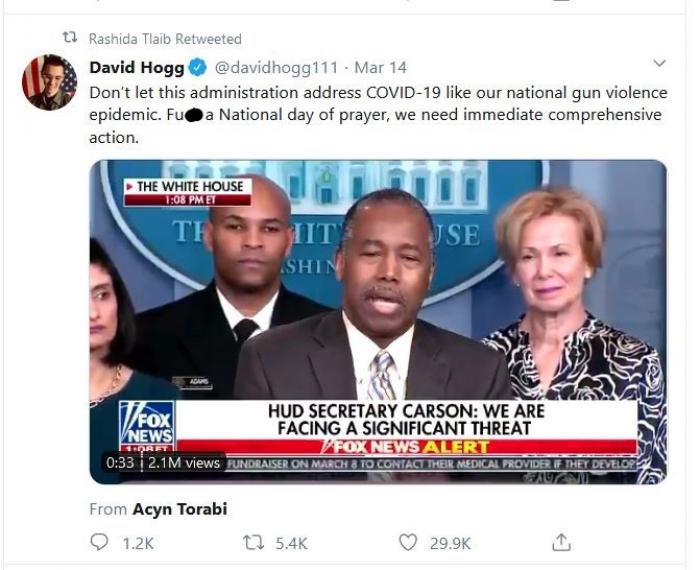 Hogg was tweeting of course in response to Ben Carson's speaking of a day of prayer in which Carson said,

“And those are the things that will keep us there too.”

Watch: Joe Biden Announces Who He Wants As His VP, It’ll Make You Sick

At the most recent debate, Joe Biden made a bold move in mentioning who he would pick for his running mate if he gets the nomination.

I say it was a bold move, but in reality, it was just a pathetic attempt at drawing in a group of people. Bernie tried to copy the move as to not let Biden get a step ahead of him.

Former candidate for Florida governor, Andrew Gillum made an announcement that he is entering into rehab to deal with his drug problem and his problem with male escorts.

Gillum, as you may know, is a Democrat as well as a CNN contributor.

On Wednesday, President Trump announced that the border between the United States and Canada is closed to non-essential travel and both countries attempt to stop the spread of the coronavirus.

"We will be, by mutual consent, temporarily closing our Northern Border with Canada to non-essential traffic. Trade will not be affected. Details to follow!" Trump tweeted.

On Tuesday, the Chinese state media spoke with a panel of "experts" about their options in using an electromagnetic pulse weapon (EMP) on American ships that enter the South China Sea.

What a wonderful time for the Community Party of China start thinking of war….a virus, possibly made in one of their labs, is ravaging across the country and they're now worried about ships in the sea.