This City Dissolved Its Police Department 7-Years Ago, Here's What It Looks Like Now

The trending thing going on right now with the riots is the people calling for the defunding of the police. There is no real 100% agreement of what that actually means though.

There are those who want the police force COMPLETELY defunded meaning zero money to go to them.

Some people are saying that it doesn't actually mean defunding them completely, but instead that it means to cut their budgets severely.

Well, one city in the U.S. has actually done something very similar and reformed its police force.

“What we’re experiencing today in Camden is the result of many years of deposits in the relationship bank account,” says Scott Thomson, Camden’s chief of police until 2019. He led the city’s high-profile pivot to community policing from 2013 until last year and oversaw what turned out to be a steep decline in crime. Homicides in Camden reached 67 in 2012; the figure for 2019 was 25.

Over the past seven years, the department has undertaken some of the most far-reaching police reforms in the country, and its approach has been praised by former President Barack Obama.

The transformation began after the 2012 homicide spike. The department wanted to put more officers on patrol but couldn’t afford to hire more, partly because of generous union contracts. So in 2013, the mayor and city council dissolved the local PD and signed an agreement for the county to provide shared services. The new county force is double the size of the old one, and officers almost exclusively patrol the city. (They were initially nonunion but have since unionized.) Increasing the head count was a trust-building tactic, says Thomson, who served as chief throughout the transition: Daily, noncrisis interactions between residents and cops went up. Police also got de-escalation training and body cameras, and more cameras and devices to detect gunfire were installed around the city.

While many departments define “reasonable” force in the line of duty vaguely, Camden’s definition is much clearer. The department adopted an 18-page use-of-force policy in 2019, developed with New York University’s Policing Project. The rules emphasize that de-escalation has to come first. Deadly force—such as a chokehold or firing a gun—can only be used in certain situations, once every other tactic has been exhausted. “It requires that force is not only reasonable and necessary, but that it’s proportionate,” says Farhang Heydari, executive director of the Policing Project. Most important, “they’re requirements. They’re not suggestions.”

By the department’s account, reports of excessive force complaints in Camden have dropped 95% since 2014.

So it looks like excessive force went down. That's good. That means that the police are doing better. What does crime actually look like there now?

Just take a look at these two images below and it will tell you all that you need to know. 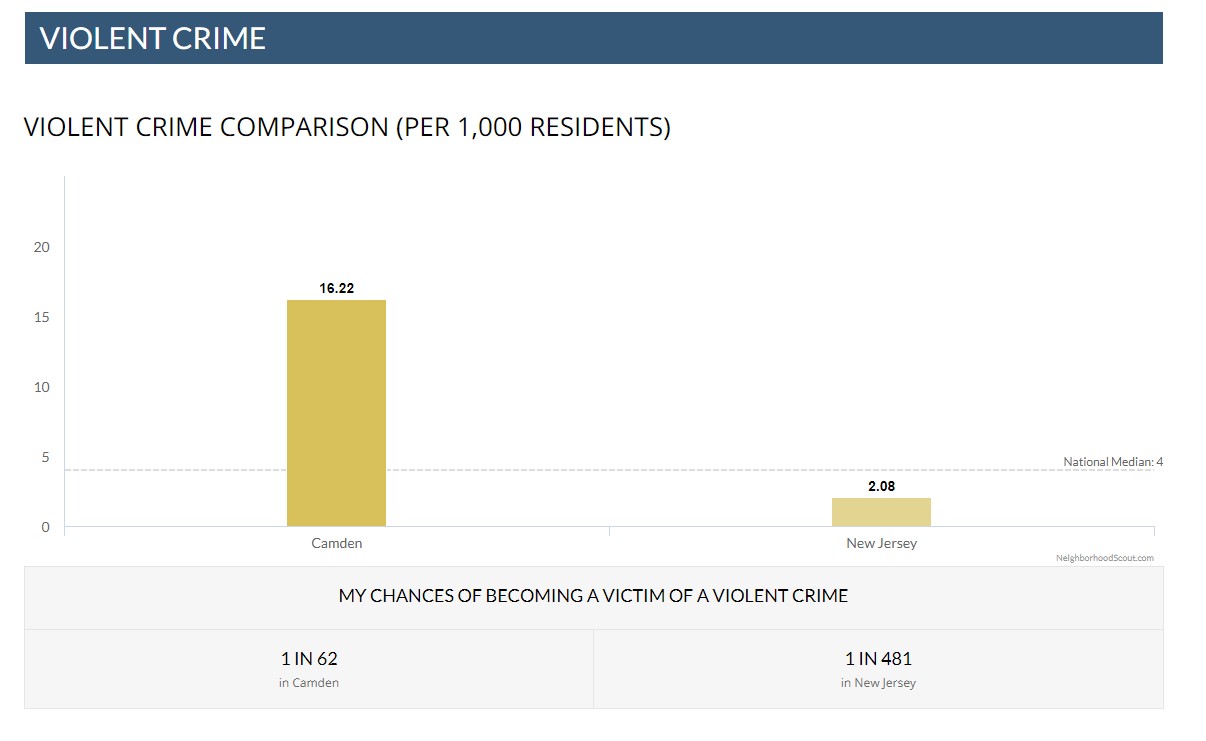 If you really want the police defunded, just watch the videos below.

You may have already heard that after 30 years on television, the hit TV show 'COPS' is being canceled because it has police in it and I guess this is offensive all of a sudden now.

I grew up watching this show, and I'm sure many of you did the same. But snowflakes are upset about it so the show is being canceled all because of the death of George Floyd.

If you didn't hear, earlier this week Gordon Klein who is a professor at the University of California was suspended after he refused to give minorities free passes on their exams during their protests and riots.

I don't blame him. It would be the thing that they're supposed to be against. Why should he give them special treatment solely because of their race?

Texas Dem House Candidate: ‘If People Loot, So What? Burn It To The Ground’ (VIDEO)

Kim Olson, a Texas Democrat running for a House seat was caught on video saying she doesn't care if people loot, and added, they should just “burn it to the ground.”

During an interview with Trevor Noah on Comedy Central’s “Daily Show,” former Vice President Joe Biden said that he has been thinking about what would go down if he won the election and President Trump refused to leave. He then revealed that he believes the military will step in and remove Trump “from the White House with great dispatch."

Angry Black Lady Screams at White BLM Protesters: 'You Racist White Liberals Do This Every 4 Years'

This lady was on her way home with kids in the car when she ran into white liberals stopping traffic with "Black Lives Matter" signs. She saw past the nonsense of these protesters and called them on their BS.

A crowd of protesters in Portsmouth, VA took down a Confederate monument outside of a courthouse. The statue fell on a man and seriously injured him.

Many have responded to the death of George Floyd by taking down statues and monuments that they link to racism and white supremacy.