These Charts Prove Dr. Fauci Should Be Imprisoned for Genocide

When you pay attention to what the mainstream media and the so-called experts say regarding using hydroxychloroquine for treating COVID-19, it becomes clear that they are the only people who have a problem with it, along with Dr. Anthony Fauci and the Democrats.

There are countless doctors in the country who are in favor of opening up the ability to use HCQ to treat their patients.

If they were convinced by the medical science that it didn't work, why would they advocate for its use?

Whenever we see the media interviews speaking with doctors about it, what do we hear about the drug? How often are we hearing them say, "Oh…no it doesn't work at all. It's a complete lie to say that it works."?

Not a single one. Every single doctor that the media allows to talk about it says that it has worked well for them.

They've done it. They've seen the results and that's why they're in favor of using it. The drug wasn't even controversial until they discovered that they could use it to treat patients.

Other countries are using the drug and having great success with it. In fact, I'm going to show you the difference between countries that have used HCQ and those that have not or have been discouraged from using it. These two charts that I'm about to show you should be enough evidence to put Dr. Fauxci behind bars. His "expertise" and decisions have lead to the needless deaths of tens of thousands of people.

The first chart below shows a drastic difference between countries that used HCQ to treat patients openly vs. countries that either banned it or discouraged it…like the U.S.

There is clearly a dramatic difference between these two groups wouldn't you say? 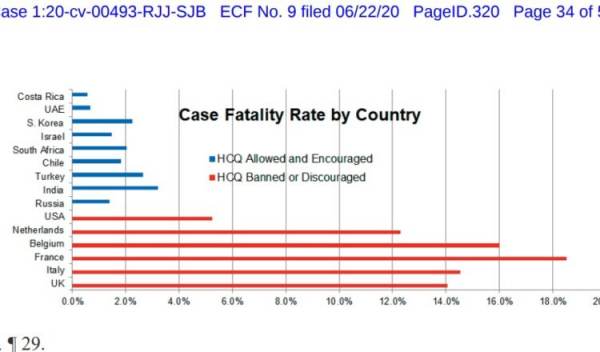 This chart shows a difference between countries that took initiative early on with the usage of HCQ and you can see a clear difference in the chart as well. 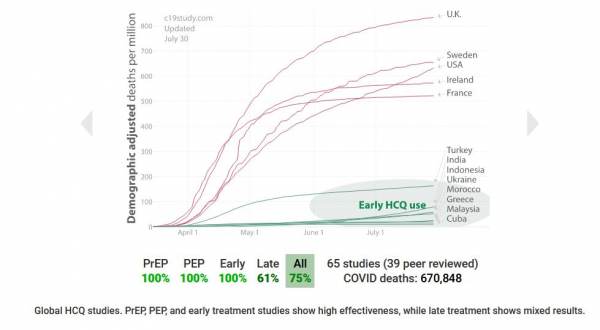 Even the Association of American Physicians & Surgeons filed its motion for a preliminary injunction to compel release to the public of hydroxychloroquine by the Food & Drug Administration (FDA) and the Department of Health & Human Services (HHS), in AAPS v. HHS, No. 1:20-cv-00493-RJJ-SJB (W.D. Mich.). Nearly 100 million doses of hydroxychloroquine (HCQ) were donated to these agencies, and yet they have not released virtually any of it to the public.

Millions of Americans fear attending political gatherings, religious services, and even large family get-togethers without the availability of early treatment if they were to contract COVID-19. Why should Americans have to wait until they or a loved one is on a ventilator before they gain access to medication to overcome this virus?

“Why does the government continue to withhold more than 60 million doses of HCQ from the public?” asks Jane Orient, M.D., the Executive Director of AAPS. “This potentially life-saving medication is wasting away in government warehouses while Americans are dying from COVID-19.”

For months now, we've been hearing the cries from the left for a mail-in voting system to be put in place for the upcoming election in November.

We, of course, all know that doing this will lead to fraud on a massive scale. How massive exactly? Well, it could be skewed by tens of millions of votes…seriously.

It is an understatement to say that the city of Seattle and the leaders of the city have been accommodating the rioters. They have completely enabled them to ravage their city, terrorize the citizens, and physically harm and kill a number of people.

Don't forget that it was city officials that allowed the whole CHAZ/CHOP incident to happen in the first place.

Senator Ted Cruz is calling out Oprah Winfrey for her ridiculous claims about white privilege during her new show, "The Oprah Conversation." He tweeted on Thursday morning that her comments were "utter, racist BS."

Winfrey said on her AppleTv show, "There are White people who are not as powerful as the system of White people — the caste system that's been put in place. But they still, no matter where they are on the rung or the ladder of success, they still have their whiteness."

Once again we are seeing just how tyrannical governors and mayors are acting amid the coronavirus pandemic…if it can even still be considered that with a 99% survival rate.

Los Angeles Mayor Eric Garcetti authorized the city to cut off water and electric to properties, including homes, that violate the "safety measures" in places regarding gathering regulations. He claims this is a means to “shut these places down permanently.”

The president made a comment on Fox & Friends about children being "almost immune" to the coronavirus because they do not seem to get sick from it as much as adults.

Former first lady Michelle Obama (or is it Michael Obama?) is now crying about “dealing with some form of low-grade depression" because of the Trump administrations "hypocrisy."

Obama said on her podcast, “I’m waking up in the middle of the night, cause I’m worrying about something, or there’s a heaviness. I try to make sure I get a workout in, although there have been periods throughout this quarantine, where I just have felt too low. You know, I’ve gone through those emotional highs and lows that I think everybody feels, where you just don’t feel yourself, and sometimes there’s been a week or so where I had to surrender to that, and not be so hard on myself. And say, you know what, you’re just not feeling that treadmill right now.”