Records have revealed that Kamala Harris promoted a "bail fund" group that helped get criminals out of jail and back on the streets so they can wreak more havoc.

So the Democrats weren't just ignoring the rioters, but they also were dumping gasoline on the fire by getting these criminals back out there.

On June 1, Harris tweeted support for the Minnesota Freedom Fund so people would help bail out the "peaceful protesters" who were locked up during the riots. 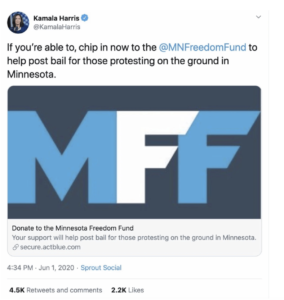 A local report in Minneapolis has surfaced that reveals who some of the people that fund put back on the streets. Among those released by the fund were a suspected murder, a sex offender who has been convicted twice and someone who fired a gun at police.

Among those bailed out by the Minnesota Freedom Fund (MFF) is a suspect who shot at police, a woman accused of killing a friend, and a twice convicted sex offender, according to court records reviewed by the FOX 9 Investigators.

According to attempted murder charges, Jaleel Stallings shot at members of a SWAT Team during the riots in May. Police recovered a modified pistol that looks like an AK-47. MFF paid $75,000 in cash to get Stallings out of jail.

Darnika Floyd is charged with second degree murder, for stabbing a friend to death. MFF paid $100,000 cash for her release.

Kamala joined Joe Biden in condemning the violence that is occurring during these riots after his Pittsburgh rally. Luckily, someone on Twitter was quick to point out that this was not always the case.

I'm confused… Here is YOU encouraging the violence to last indefinitely …🤔🤔🤔pic.twitter.com/RtEf7iUYJT

The left loves to jump all over President Trump for not condemning everything that is bad in the world. Meanwhile, it took them months to figure out that the rioting and looting is not a good look.

Joe Biden: Trump Supporters are ‘an Armed Militia in This Country’

The grim creeper is back at it! Former Vice President Joe Biden left his basement long enough to bash President Trump and his supporters. He called Donny J's supporters “an armed militia in this country” during his speech on violence, Monday afternoon.

"This president, long ago, forfeited any moral leadership in this country. He can’t stop the violence because for years he’s fomented it. You know, he may believe mouthing the words “law and order” makes him strong. But his failure to call on his own supporters to stop acting as an armed militia in this country shows how weak he is," Biden said. "Does anyone believe there’ll be less violence in America if Donald Trump is reelected?"

Over the weekend celebrities wore skimpy clothes and danced provocatively at the MTV Video Music Awards. An event I have never watched, nor do I ever plan to. Just watching the video of Lady Gaga's trashy performance in order to write this article had me cringing.

The popstar told viewers during the ceremony, “I might sound like a broken record, but wear a mask. It’s a sign of respect,” she said during one of her several acceptance speeches.

Senator John Kennedy is strongly urging former Vice President Joe Biden not to participate in the presidential debates. He said on FNC's “Sunday Morning Futures” that the Democrat presidential nominee should take House Speaker Nancy Pelosi’s advice and sit this one out.

He added that by not debating the president, Biden would be a  “walking dead man politically.”

First, the state and county told Grace Community Church, which is led by Pastor John MacArthur, that because of the virus and mandates, they could not worship in their church building.

Six Democratic mayors from an area in Minnesota known as the Iron Range shocked the rest of the Democrats when they announced that they would be voting to re-elect President Trump in November.