In my opinion, I think we are really seeing an awakening in society. I'm not talking about all the Black Lives Matter stuff going on and the riots though. What I'm referring to is public education.

I think more and more people are becoming aware of how corrupt and how controlling government-run education is and I think that it is starting to decline and will continue to decline unless it is fixed.

It's gotten so ridiculous now that an Iowa State University professor is now threatening to kick out students who oppose things like Black Lives Matter or abortion, basically anything "progressive". 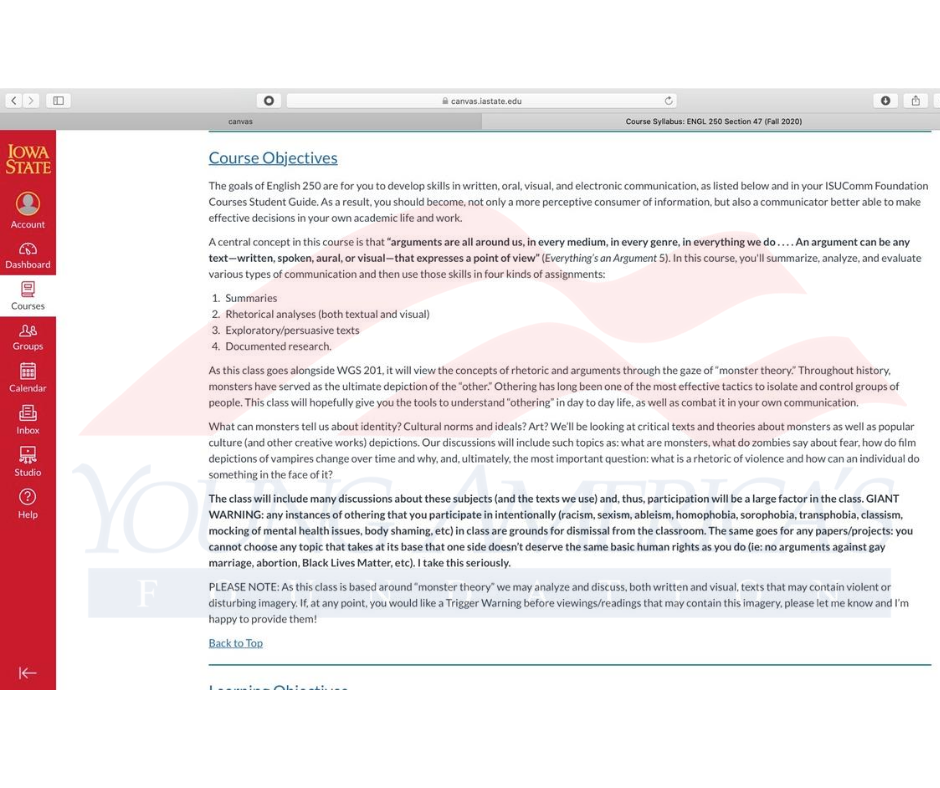 There may be some who try and make the argument that many colleges are private, but that's not entirely true. The government still has its hand in the cookie jar because they may have certain government titles and they're accredited.

Have you ever asked yourself, "accredited by who?"

Being accredited largely means that the government has given its seal of approval on the school's education.

Labeled a "GIANT WARNING," the portion of the syllabus banned "instances of othering," which it defined as "sexism, ableism, homophobia," and a variety of other things. "The same goes for any papers/projects: you cannot choose any topic that takes at its base that one side doesn’t deserve the same basic human rights as you do (ie: no arguments against gay marriage, abortion, Black Lives Matter, etc). I take this seriously," it added.

Young America's Foundation, a conservative youth organization, released a screenshot of the syllabus on Monday, claiming that it came from a professor named Chloe Clark. According to Iowa State's website, the course, English 250, is for "written, oral, visual, and electronic composition." The course is required as part of students' "Communication Proficiency" requirement for graduation.

In a statement to Fox News, the university described the syllabus as "inconsistent" with its commitment to the First Amendment.

I truly think that this is kickstarting a revolution in which Americans are going to assume more control over their daily lives than they had before.

The public education system is falling apart as we can see by the tons of parents who have withdrawn their children from public school and have opted for their own homeschooling course instead. I think that we'll continue seeing this as the radical left moves further into the system and I think we'll even see it with colleges as well.

People need to know how to defend themselves in the unforeseen circumstance that one ever comes under attack.

You honestly never know who is watching you, following you, or waiting to make a move to attack.

Hillary Tells Victims of Sexual Assault To “Get Over It”

Everyone on the planet knows how inappropriate Democratic nominee Joe Biden really is.

Nonetheless, Democrats are still cheering the guy on regardless of how bad it is or what he says or even does.

“I’m willing to stick my neck out again and predict that Trump will win on November 3, 2020,” Nigel Farage said.

Leading Brexiteer Nigel Farage declared that despite what national polls are reporting, he will "stick his neck out" and predict a second victory for President Donald Trump in November.

The woke movement has moved into tires. Goodyear has banned employees from wearing pro-Trump, All Lives Matter and pro-police gear, but allow BLM and LGBTQ.

A Facebook group was created in support of the man who allegedly murdered 5-year-old Cannon Hinnant as he rode his bike in his father's driveway. According to witnesses, 25-year-old black male Darius Sessoms ran up and shot the little boy in the head at point blank range.

The left-wing group was titled: “Justice for Darius Sessoms,” and referred to Sessoms as a “political prisoner” and that the "system" is “persecuting him unjustly.”

Did you know that Joe Biden's veep pick, Kamala Harris, still owes AT LEAST $1.1 million to vendors for her failed 2020 presidential campaign?