The people of Michigan are fed up with Governor Whitmer and this Michigan pilot is another example of that. And gets points for the creativity he used to deliver the message.

This pilot lives in Grand Rapids, which is in Western Michigan. He spent an hour planning his trip to Lansing, home of Governor Whitmer's mansion so that he mapped out the letters "FU" while making the trip.

Check out a screenshot of his flight:

Literal "F U" from Michigan Pilot to Governor Whitmer 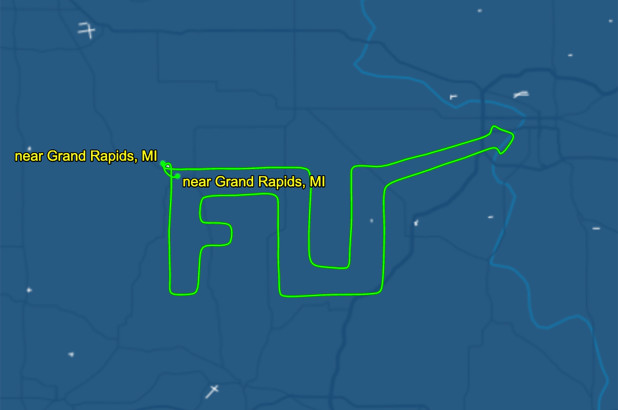 Ed Frederick said he was inspired to hop in his plane in do this when Whitmer extended the state's emergency lockdown through May 28.

“The government, no matter Democrats or Republicans, always seem like they’re trying to do something just to prove they’re doing something, without weighing the ramifications.”

Frederick owns a small business with his sister and believes the lockdown is necessary only where the cases are concentrated in southeast Michigan near Detroit.

“That’s been an issue for a lot of people in the rural counties,” he continued. “There are 82 counties, but really only four need to be locked down.”

And this pilot isn't the only person fed up with Whitmer.

A common theme among the angry protesters is they believe their choices are being made for them. Frederick is on board with this stance.

People are fed up with this situation. While respecting the virus, they realize we must open our country back up.

Speaker of the House Nancy Pelosi is seriously considering trying to get a plan passed through Congress that would surely bring in socialism and bankrupt America.

Her plan is what has been proposed by people like Andrew Yang and Alexandria Ocasio-Cortez. The idea is a universal basic income. Pelosi said that the more she considers it the better the idea seems.

You may have heard that last week, Attorney General Bill Barr send a memo to the 93 U.S. Attorneys instructing them to be sure that they take action against governors and mayors who abuse their authority.

Many leaders at both the local and state levels have been taking things too far and violating the basic civil rights of many Americans, and this is happening in multiple states now like California, Michigan, Illinois, and New York.

Trump: Biden Allegations ‘May be False’ but ‘He Should Respond’

Of all people to be falsely accused of sexual misconduct, President Donald Trump holds a reigning trophy. While I do not doubt the allegations against former Vice President Joe Biden, I do commend Trump for calling on Biden to at least defend himself and address the situation.

On Thursday, Trump called on Biden to respond to the allegations against him from a former Senate aide.

Chinese Accuse US of History in ‘Bacteriological Warfare’

China’s state newspaper China Daily published a column on Thursday that accuses the United States of having a history of “bacteriological warfare.” Is it possible that the communist country is attempting to pawn off their dirty deeds onto America?

The article implies that the U.S. military brought the virus over to Wuhan, China. I guess it’s just a coincidence that they have labs in Wuhan that specialize in such matters.

Another example as "do as I say, not as I do" from the left. After former President Barack Obama and his wife urged people to stay home, he was seen out golfing at a country club.

Two days after this, DC residents received a public service from none other than former First Lady Michelle Obama. Here's what the message said:

New evidence suggests that General Michael Flynn was being targeted by the FBI. The evidence comes in the form of handwriting.

FBI notes from 1/24/2017 have been unsealed that show the intent of this specific interview was to bury Flynn: “What is our goal? Truth/Admission or to get him to lie, so we can prosecute [Flynn] or get him fired?”