Greta Thunberg Secret EXPOSED During Facebook Glitch, She's Not Who She Says She Is

Greta Thunberg has become the "franchise player" of the climate change movement. Over the past year or so, she has been very outspoken about climate change, even insulting at times.

She is arguable the most well-known climate change activist since Al Gore started his propaganda back with "An Inconvenient Truth" which turned out to be no truth at all (surprise, surprise).

One of the reasons that she has become so popular is because she seems to "intuned" to the world around her at such a young age. But there has been much speculation about whether or not it's all genuine.

Her speeches seem very rehearsed and scripted, because she way she speaks when answering questions is far different than when she gives speeches.

Facebook recently had a glitch that exposed people who are really posting content on another's page and it appears that we have some solid evidence that the things that Thunberg is saying aren't her own words. It looks like it was her dad who has been posting for her. 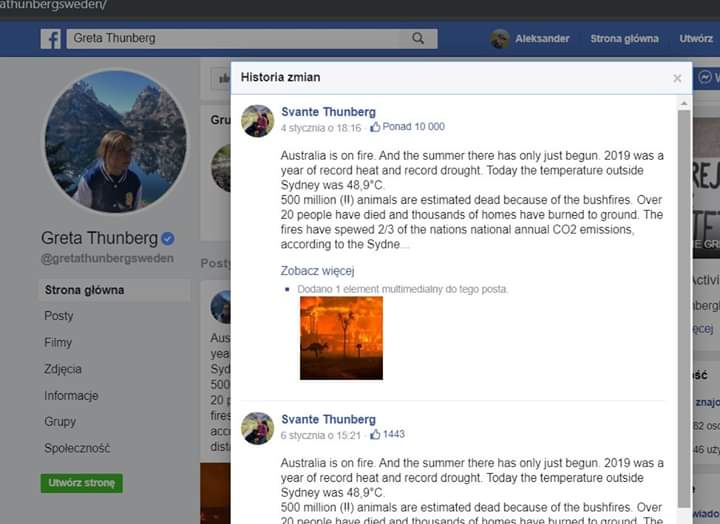 Facebook says the bug was the result of a code update that it pushed Thursday evening. It’s not something most people would have encountered on their own, since it took navigating to a Page, viewing an edit history, and realizing that there shouldn’t be a name and profile picture assigned to edits to exploit it. Still, despite the Friday morning fix, screenshots circulated on 4chan, Imgur, and social media appearing to show the accounts behind the official Facebook Pages of the pseudonymous artist Banksy, Russian president Vladimir Putin, former US secretary of state Hillary Clinton, Canadian prime minister Justin Trudeau, the hacking collective Anonymous, climate activist Greta Thunberg, and rapper Snoop Dogg, among others.

Facebook points out that no information beyond a name and public profile link were available, but that information isn’t supposed to appear in the edit history at all. And for people, say, running anti-regime Pages under a repressive government, making even that much information public is plenty alarming.

I've been keeping a close on everything regarding the coronavirus for a number of reasons, but most importantly so I know what to do for myself and my family.

Hillary Is Panicking! Sues to Stop Sworn Deposition into Benghazi and Illegal Server

Earlier this month, a federal judge ordered that Hillary Clinton must give a face-to-face deposition to the government watchdog group Judicial Watch and Tom Fitton regarding the Benghazi coverup as well as her email server which was illegal.

She is furious over the order and it's obvious why she's upset, she's about to incriminate herself.

White House trade adviser Peter Navarro said on CNBC's Squawk Box Monday that he is presenting President Donald Trump with an executive order geared at establishing medical supply chains in the United States and reducing our dependency on importing from other countries.

CNBC host Andrew Ross Sorkin said, "The New York Times is reporting this morning that the administration is attempted to persuade a Germany firm developing a possible vaccine, the company, CureVac, to move its research development to the United States, this is according to German officials, raising fear, apparently, in Berlin that President Trump was trying to ensure that any enucleation would be available first in the United States and, perhaps, exclusively."

Aviation Group Predicts Airline Bankruptcy by May due to Coronavirus

According to The Centre for Aviation (CAPA), the coronavirus crisis could bankrupt most airlines around the world by May. If travel restrictions continue then there will be great economic stress on airlines.

The group is encouraging governments to work together in order to mitigate the risks.