Former Child Star Arrested While Being High on Meth, May Face Prison Time

If you've ever known someone who has ruined their lives after getting involved with drugs, then you know that it is a terribly sad situation. It's even sadder when it's someone you've known from childhood.

In a similar fashion, a person you may have known of as a child is in a bad situation. It is a child actor from the 90s…Shaun Weiss.

Shaun Weiss was probably best known for playing the character Goldberg in the move 'The Mighty Ducks'.

Today, Weiss is in a bad spot and was recently arrested for residential burglary as well as being under the influence of meth. 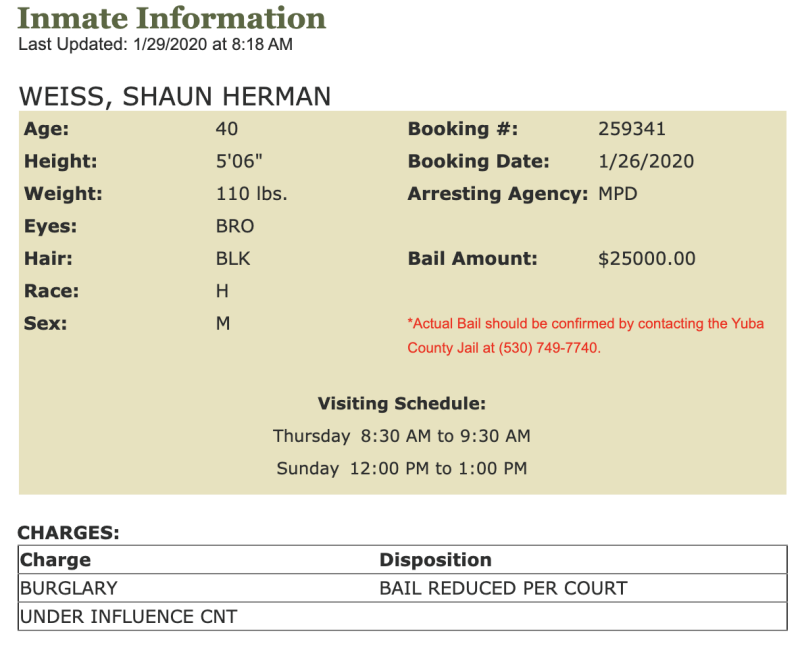 A GoFundMe page has been created by his friend Drew Gallagher to help Weiss in an effort to try and get Weiss off the streets, cleaned up, and off drugs.

PLEASE HELP ME SAVE SHAUN WEISS

For the last 3 years I’ve been doing all I can to help Shaun. His loss of his parents sent him into a depression and so he turned to drugs. Before long Shaun was sleeping on my couch and eventually the streets where he is beaten up and has any belongings stolen

Drew Gallagher recently opened up to People about his friend Weiss, saying that while the former child star isn’t “blameless,” the public should attempt to show a bit more compassion.

“There’s not a blameless Shaun Weiss here, he is definitely to blame for a lot of stupid s–t he does,” Gallagher said. “But if you were to spend any time with him you would have a drastically more compassionate understanding of what he was about.”

“He’s sick, he’s mentally ill,” Gallagher went on about the actor. “He’s just sick and everybody gives up on him.”

Gallagher describes Weiss as “the nicest, softest, sweetest human being,” adding, “he’s like a brother to me. I won’t abandon him.”

“All Shaun wants to do is stand on stage and make people laugh,” he shared. “He’s one of the funniest comedians you’ll ever meet, he’s sharp, [he’s] witty, he doesn’t take himself too seriously. He understands the dire situation he’s in. The reality is there’s something where our brains go right, his brain goes left.”

Lindsay Lohan's dad has actually secured an offer for him to go to rehab for free and get the help he needs once he gets out of jail.

At the time of this writing over $7,000 has been raised for Weiss.

WATCH: Graham Says Schumer Is ‘Scared To Death’ This Dem Might Take His Seat

Chair of the Senate Judiciary Committee, Lindsey Graham said during an interview with Fox News that Chuck Schumer is scared for his job.

There is someone gunning for his position and he's worried that she may actually win it. That person is none other than Alexandria Ocasio-Cortez. Continue reading…

Even though I'm a big football fan, I must admit that I didn't watch the Super Bowl on Sunday night, at least not all of it.

I did happen to catch about half of the last quarter to see how the game would end because the ends of football games can always go in any direction. Just think back to the Patriots and Falcons Super Bowl a few years ago. Plus, I've seen how the Chiefs have been playing lately and I thought that even though they were down, that they might make one heck of a comeback…I was right. Continue reading…

BURN: Trump Snubs Pelosi Before State of the Union Address

President Donald Trump completely disregarded Nancy Pelosi as he walked to start his State of the Union speech on Tuesday. She reached out to offer him a handshake, and ignored her…and it was GREAT.

As Nancy took a copy of Trump's speech and reached out, he simply turned and walked away. Continue reading…

Senator Susan Collins had the audacity to argue that the president "learned a lesson" from this impeachment debacle. Continue reading…