Bush Foundation Sent Millions of Masks to China, Turned Back on Shortage in U.S.

We can all be very thankful for having a president that put America First. The George H.W. Bush Foundation certainly did not do the same.

China has been supplied with 2 million masks, even though the United States is running extremely low on them. In many areas across the country, the masks aren't available in stores. The story was shared on LinkedIn: 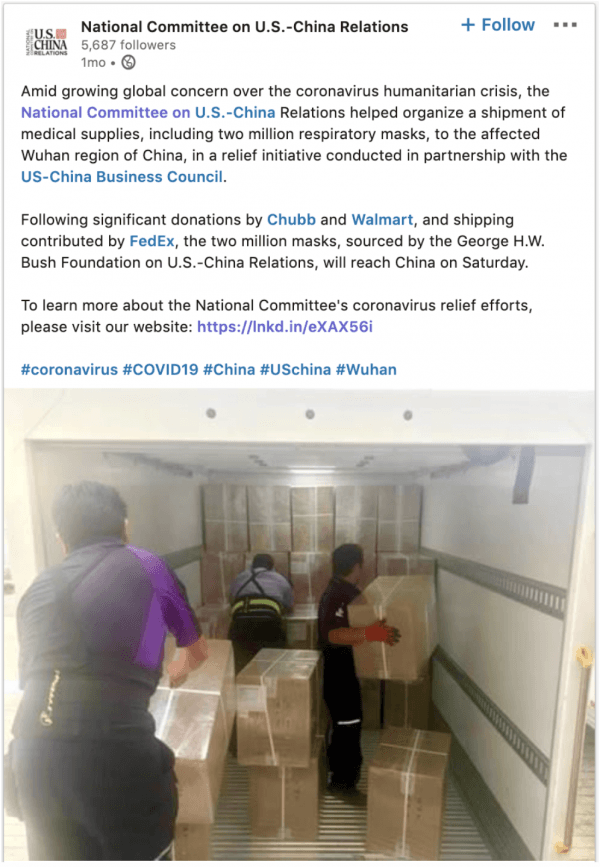 More on the story from The National Pulse:

Meanwhile, China’s reaction to the onset of the pandemic was to poach vast quantities of medical supplies from other countries.

A company insider at the Chinese Communist Party affiliated developer Greenland Group exposed the operation: “Basically all employees, the majority of whom are Chinese, were asked to source whatever medical supplies they could” including “bulk supplies of surgical masks, thermometers, antibacterial wipes, hand sanitizers, gloves and Panadol.”

And that’s coming from the same regime that insists on“global cooperation” to combat the pandemic it caused.

American hospitals are already experiencing considerable scarcities of masks and other equipment, expected to grow in the coming weeks.

According to even the Washington Post: “Nearly 90 percent of U.S. mayors who responded to a national survey on coronavirus preparedness said they lack sufficient tests kits, face masks and other protective equipment for their emergency responders and medical workers, while 85 percent said they do not have enough ventilators for their hospitals — critical shortages that could lead cities and towns to be quickly overwhelmed should the virus spread through their communities.”

China has lied about this virus the entire time. They claim only around 3k people have died in Wuhan, but the real number is projected to be closer to 40k.

And still, the Bush family turned their back on America and helped the country that unleashed a plague on the world.

U.S. City Declares State of Emergency Over Coronavirus Concerns…Even Though There Are ZERO Cases Reported

The mainstream media and Democrats are using scare tactics to try and con Americans into giving them power so that they can protect them. As we're seeing the coronavirus spread, we're seeing some get too panicked.

San Francisco has already jumped the gun and declared a State of Emergency.

Project Veritas has been on a roll recently in all the cover-ups and shady dealings they have exposed recently, and they've done it once again, this time they took down ABC News reporter David Wright after a damning new video was released.

ABC News was forced to suspend the reporter after a preview video came out exposing how ABC News creates narratives about the President and misleads voters.

Warren: I will Reverse Trump's Border Policy with 'New Plan'

In addition, she promised to ensure that our Constitutional rights aren't violated by law enforcement agencies like "warrantless property searches" or "arbitrary stops."

VP Mike Pence Tells CPAC: 'We are Ready for Anything!"

The last few years I have gone to the Conservative Political Action Conference (CPAC) and it's amazing. Dozens of Conservative speakers, which generally includes the president and vice president. After I had my daughter though, it wasn't quite so easy to hop on a plane and travel across the country.

This year, Vice President Mike Pence spoke to CPAC attendees and told them that the Trump administration is well prepared for the threat of the coronavirus.