You're believing a lie if you're beliving the hype that the media is feeding you about the deaths from the coronavirus.

I'm not dismissing it altogether. People are getting sick and people are dying from it, but based on what we're being told by the media, you would think that this years total number of deaths is going to be much higher than any other year.

Well, that's not what the CDC's own data suggests.

According to a report and the CDC's own numbers, 2020 has had the lowest number of weekly deaths that we've seen since 2009.

I divided the total number of deaths for each year by the number of weeks. That is 52 weeks for all years, except for 2020, in which 32 weeks have elapsed as of this past Saturday, August 8, 2020, which is the most recently updated week in the CDC data cited. This gives us the average number of deaths per week for each of those years, and allows a meaningful comparison between 2020 and prior years.

CDC data provides deaths from all causes for all previous years in the 21st century. (6) (7) The CDC also provides data for all-cause deaths in 2020. (8)

​Column D of Table 1 shows the total deaths divided by the number of weeks in the year to obtain an average number of deaths for each week in that particular year. That is calculated for all 21 years (2000 through 2020). 32 weeks for 2020 is highlighted to draw attention to that difference from the other years.

It is important to factor in the growing US population over the last two decades. The US population for each year is given in Column E.

Column G shows the ratio of total weekly deaths per US population for each of the first 21 years of the 21st century. 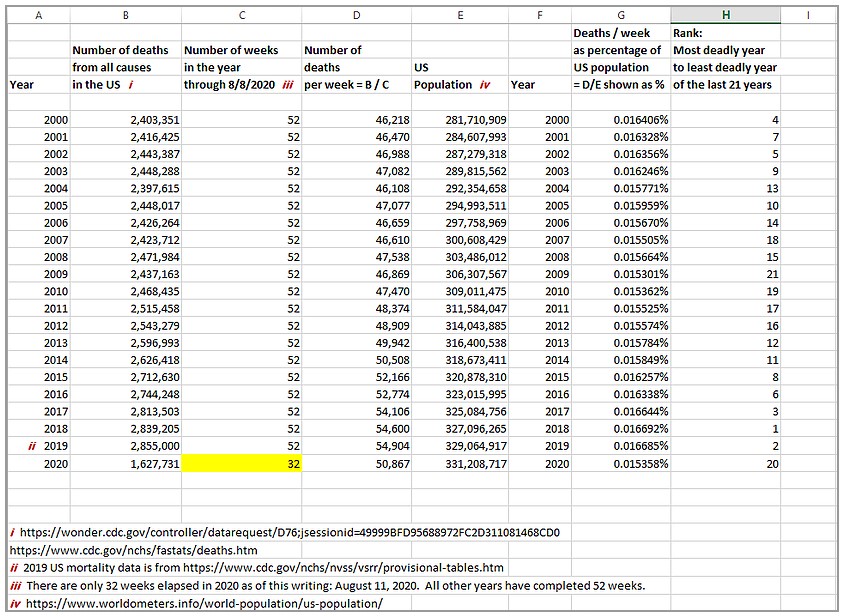 A comparison of the percentages in Column G are best seen in Graph 1 below. 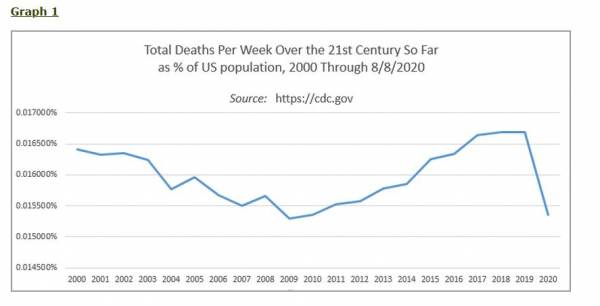 Dr. Huber also said this in her report:

If COVID-19 is genuinely the deadly pandemic that it is widely thought to be, then total deaths would not only be a little higher than usual, but would be much greater during the period of its peak incidence and closely following weeks. It is not possible to have a deadly pandemic rage through a population without increasing the total number of all-cause deaths during the year of its peak incidence, because there is no reason for alternate causes of death, (heart disease, cancer, etc) to simultaneously decline. Therefore, if deaths are not significantly increased above previous years for a given region, then there has been no pandemic, nor even an epidemic there.

On the contrary, what has been found is that so far there are fewer deaths per week in 2020, than in any other year since 2009. Although some of this lower death rate may be due to reporting lag, that lag is likely too small to explain the considerably lower weekly death rate in 2020 than in previous years.

There are a number of cities around the country that I believe have fallen so badly that I don't think that there is any coming back from the calamity.

If you've ever been to a live pro sports event, then you likely know that fans can have very different reactions to the things that the players do.

President Donald Trump took a heavy loss over the weekend when his younger brother, Robert Trump, died on Saturday. Heartbroken and grieving, Trump gave a statement:

“He was not just my brother, he was my best friend. He will be greatly missed, but we will meet again.”

Let our children be children! Stop with the unnecessary and unnatural sexuality in their cartoons! This is just one more show I'll have to add to the list of cartoons that my children won't be allowed to watch.

Disney Channel's animated series The Owl House now features Disney's first (to our knowledge) bisexual lead character. While Disney executives did not originally want bisexual or gay characters on the channel (as they shouldn't) they later changed their minds, according to show creator Dana Terrace.

An Arizona school district had their reopening plans for Monday cancelled after more than 100 teachers called in sick.

“We received an overwhelming response from staff indicating that they do not feel safe returning to classrooms with students,” J.O. Combs Unified School District superintendent Gregory A. Wyman said in a statement. “In response, we have received a high volume of staff absences for Monday citing health and safety concerns. Due to these insufficient staffing levels, schools will not be able to re-open on Monday as planned.”

Even on a day when President Trump's brother passed away, the left continues to hate on him. The leftists responded to the passing of Robert Trump with the hashtag #WrongTrump on Twitter.

Even worse, many of the culprits are on Twitter defending their stance.