At the end of November, the Trump legal team headed by former New York City Mayor Rudy Giuliani and Jenna Ellis were able to present their case for voter fraud before the Arizona state senate.

As it turns out, we actually have something amazing to report about what's going on in Arizona and this is all thanks to the Trump team.

The Arizona legislature has officially called for the decertification of the state's fraudulent election results.

According to GOP members of the Arizona State Legislature, the hearing is designed “to gather the evidence that justifies calling a special session to contemplate what happened and take immediate action accordingly.”

“We are pleased that the State Legislatures in Pennsylvania, Arizona, and Michigan will be convening hearings to examine the November 3rd presidential election,” Ellis said in a statement provided by the GOP lawmakers.

Meanwhile, like some GOP senators in Pennsylvania have said, the Arizona lawmakers noted that the U.S. Constitution grants state legislatures the power to hold election hearings on alleged irregularities and fraud.

Arizona House Majority Leader Warren Petersen released a statement Sunday night ahead of Monday’s press conference: “The election should not have been certified with the number of irregularities and allegations of fraud. Especially troubling to me are the allegations surrounding the vendor Dominion. It is imperative that a forensic audit occur immediately of the equipment and software. Upon any showing of fraud the legislature should immediately convene to decertify the vote.”

We have a contested outcome in Arizona."

We have a contested outcome in Arizona. pic.twitter.com/lDajI5lOMM

Of course, the mainstream media is silent about it and even Google is censoring it.

If you did a Google search for "Arizona invokes article 2 section 1 constitution" you won't get anything relevant. However, if you did the same search on a non-biased search engine like DuckDuckGo, you will find the results. 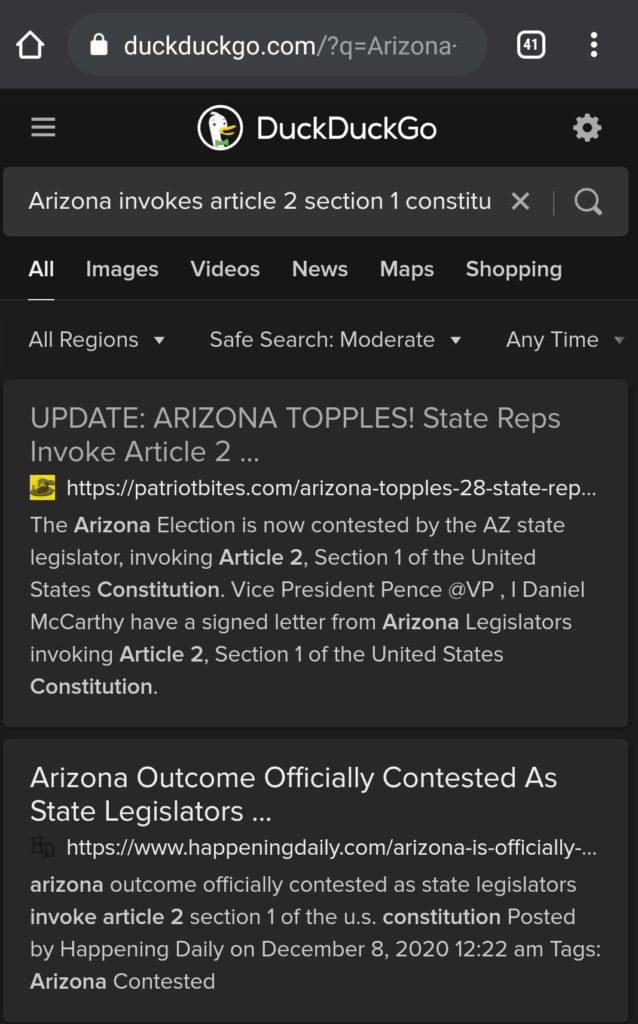 On Tuesday, Senator Rick Scott appeared on Fox News Channel’s “America’s Newsroom,” and pushed back against coronavirus lockdowns. He declared that they are killing businesses and people's jobs.

Scott stated that liberal governors implementing lockdowns are "killing people's jobs" as well as the opportunity for  “people to put food on the table."

Imagine taking your child to see Santa at the mall and leaving with your child in tears…not how most people picture their Christmas experience.

There is a video being shared on social media that shows a mall Santa making a young boy cry after the boy asks for a Nerf gun, and the liberal Santa told him, "No guns."

Are we looking at a second stimulus check? It's possible!

According to reports, House Minority Leader Kevin McCarthy and Senate Majority Leader Mitch McConnell told the White House that they would support $600 stimulus checks, in a coronavirus relieve package.

On Monday, CNN medical analyst Dr. Leana Wen told viewers that they should cancer their Christmas and New Year plans. More fear-mongering for a virus with a one percent death rate.

Wen said, “The incubation period for COVID-19 … is up to 14 days. The average is about five to seven days. And so what that means is we had Thanksgiving and people returning from Thanksgiving about a week ago. So this week, we’re going to see the impact of that Thanksgiving surge. And I’m afraid that all of those numbers that you just presented, Erica, they’re going to go up."

We have an update on a recent story we told you about regarding one liberal, idiot mall Santa and how he tried to ruin Christmas for one little boy.

In case you missed the story yesterday, here's what had happened:

By now, I'm sure you've all seen the infamous video that shows the Democratic poll workers in Georgia counting ballots that were hidden underneath a table after the Republicans and the media had left.