BOOM! Antifa Terrorist Who Bombed Federal Agents in Portland – BY HIS GRANDMOTHER!

One good thing about Antifa, is that they are complete idiots.

Earlier this week, a man was identified and arrested because he was going around committing arson shirtless. Well, tattoos can be very telling, especially when they are your own name!

But sometimes, they're not the only stupid ones.

One Antifa terrorist was seen on video throwing some sort of explosive at the federal courthouse in Portland which has been under protection from federal agents.

Antifa just threw what appears to be an IED at the federal courthouse. pic.twitter.com/fX1UMvsFUw

Here it is from another angle:

This was actually something different than what has been happening before. Rioters have been throwing Molotov cocktails and shooting fireworks, but this was an actual explosive designed to cause damage.

Well, this punk was outed…by his own grandmother!

I don't think that it was intentional, but maybe she did do it intentionally.

If you look at the man closely, he has been seen wearing a vest. This vest was actually purchased for him by his grandmother at Hibbett Sports. How do we know that? Because she left a review for the vest…with a photo of him wearing it!

Here is what the review said.

I got this for my grandson who's a protestor downtown, he uses it every night and says its [sic] does the job.

Owned this product for: Less than 1 month
Use this product: Daily
Incentivized Review: Yes

Yes, I recommend this product. 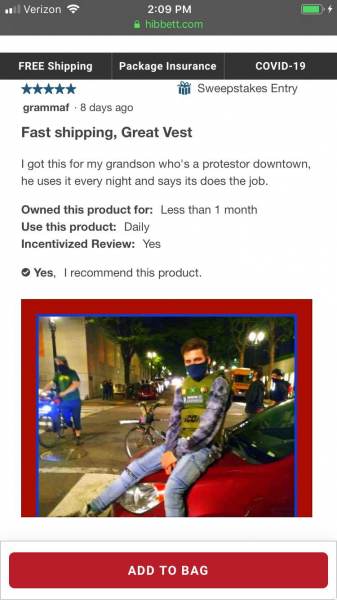 "shocking twist. The guy who threw an IED at the portland courthouse was identified in a review by his grandma who bought his gear. This might be the most embarrassing defeat of antifa yet. Grandmas lil revolutionary. Retweet for luls. Archive https://archive.is/7DpjC "

Don't fall for what the mainstream media tells you…ever.

Right now, they want you to believe that black people are being highly persecuted and are receiving non-stop death threats and racism.

AMAZING! More Than 100 Police Departments Pull Out of Security Detail for DNC

There seems to be some common sense that remains within the police departments.

I don't mean that as a jab at police, but rather at the country full of idiots who lack common sense. My point is that contrary to the rest of the country, at least many police departments have common sense because they're not stupid enough to put themselves in harm's way like the liberals are doing on the street.

All Work, No Play: McConnell Declares Election will be 'On Time'

Earlier today, President Donald Trump tweeted a suggestion to delay the November election until it was "safe" for people to vote in person.

Obviously this was just a ploy to mess with the left, who are adamant about the polls staying closed and voters mailing in their ballots.

Music artists like Mick Jagger, Elton John, Aerosmith, Sia and over 50 others signed a letter demanding that politicians stop using their music at political events and rallies without their consent.

“Being dragged unwillingly into politics in this way can compromise an artist’s personal values while disappointing and alienating fans,” the letter from the Artist Rights Alliance reads. “For artists that do choose to engage politically in campaigns or other contexts, this kind of unauthorized public use confuses their message and undermines their effectiveness.”

It's good to see that not everyone in Hollywood has completely lost their mind. Tyler Perry appeared on CNN and was interviewed by Anderson Cooper and discussed his stances on police reform.

The actor and director made it clear that he does not support "taking money from the police department," and added "we need more police" despite calls for the defunding of police.

Former United Nations Ambassador Susan Rice took time out of her Wednesday to appear on "The View" and rip President Trump for his handling of the coronavirus crisis.

Rice said the blame for 150,000 deaths due to the coronavirus crisis can be placed on "Donald Trump and his gross mishandling of this pandemic.”