Most often when you hear of pro-Palestinian activists inside of Palestine, there are not just verbally advocating for a Palestinian state, if you catch my drift.

Anti-semite Rep. Rashida Tlaib was seen wearing a t-shirt that was designed by pro-Palestinian activists that portrays the country of Israel being erased from the map.

According to the Washington Free Beacon,

Tlaib did not respond to a request for comment.

Tlaib has been repeatedly criticized by the pro-Israel and Jewish communities for comments they say are anti-Semitic. The Anti-Defamation League (ADL), which combats anti-Semitic incitement, condemned Tlaib in late January for tweeting an inaccurate story claiming Israeli Jews murdered a Palestinian child. The ADL cited her for promoting a "blood libel" that was "steeped in centuries-old accusations used to demonize Jews."

Tlaib's associations with many organizations and causes that single Israel out for undue criticism have also generated deep divides between the congresswoman and the pro-Israel community. They include groups that support the Boycott, Divestment, and Sanctions movement, which critics call anti-Semitic for its promotion of economic boycotts against Jewish-owned businesses.

The product description on the website where the shirt is sold reads:

Stand in solidarity with Palestine by wearing this beautiful Palestinian tee shirt. An outlined map of Palestine is filled with red, white, and green Arabic letters that look stunning from a distance and spell the word Palestine up close. A patterned shemagh wraps around the neck of the Palestinian state like the brave soldiers whose boots stand on the dusty ground.” 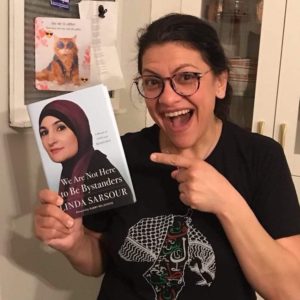 Rep. Tlaib has been very vocal about her hatred of Israel, along with her other "squad" member Ilhan Omar and was recently condemned by the Anti-Defamation League when she tweeted out a fake news story created by terrorists to cause unrest claiming Jews murdered a Palestinian child.

Oh My! Sanders Team Unleashes A Devastating Video About Biden’s Mental Issues, This One Is Going To Sting

There has been a recent video put out that is absolutely devastating to Joe Biden.

The video highlights Joe Biden's mental issues and was put out by a group of Bernie Sanders supporters. This video is going to follow Biden through the rest of the election season and contribute toward his downfall.

Earlier this week, President Trump rejected an invitation made by Speaker of the House Nancy Pelosi, refusing to attend the annual St. Patrick's Day lunch at the Capitol.

This really says something because this is the first time since 2003 that a sitting president has not attended the lunch. The last time a president missed it was back in 2003 when George W. Bush was in office.

Director of the National Institute of Allergy and Infectious Diseases, Dr. Anthony Fauci, declared that the coronavirus would be much "worse" if President Trump didn't have travel bans in place on China and Iran.

“I believe we would be in a worse position,” Fauci told the House Oversight and Reform Committee, "Whenever you look at the history of outbreaks, what you see now in an un-contained way and although we are containing it in some respects, we keep getting people coming into the country that are travel-related, we’ve seen that in many of the states that are now involved."

She told Raju that President Donald Trump is a “liar,” who needs to   “shut his mouth” on the coronavirus outbreak.